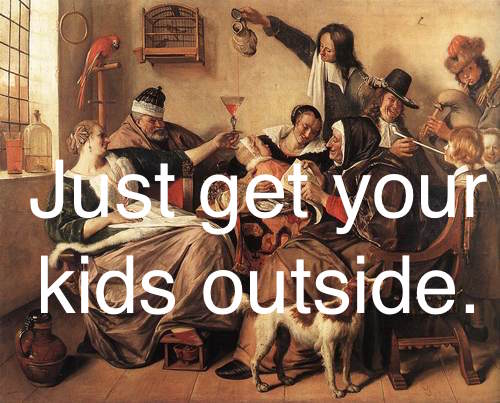 The narrative emerging out of Canadian news outlets today is that Canadian parents are holding their children hostage from the great Canadian outdoors. The Participaction Report claimed that 9/10 Canadian children were not active enough, and they gave a D- to the nation. The advice they gave rings clear as a bell from our televisions (ironic), stop letting your kids sit idly in front of the TV and allow them to go outside. The narrative is telling Canadian parents that they are not doing enough. It is blaming them for letting their children sit and do nothing. It is saying, you are not doing enough and you are not enough.

As much as Participaction wants the narrative to be about just taking your kids outside…it cannot be. There are wider considerations that need to be taken into account. Parents who work long hours, may find it difficult to find the time to provide the cookie-cutter fitness routine the government prescribes. Just go to a park?! Well, the school field/park near my house used to have a swingset, but that’s gone. Many parks become fill quite quickly, too.

Do not be so hasty, government, I’m here to tell you, you’ve done yours poorly: We need to reconsider this discourse of active children in more nuanced terms than just blaming the parents. Perhaps better funding at schools and for teachers!! would produce more after-school programming for children to take part in. Perhaps raising minimum wages and stopping corporations from offering only part-time or contract works would allow parents to have more stable incomes and, if not more money to enable activity for their children, more energy to spend time being fit with their children. Perhaps job security in creative fields? Perhaps we should look at the larger issue at hand instead of telling parents that they need to take their children out, like a puppy at pee-time. It also seems clear that, alongside the socioeconomic issues, the gendering of sports impacts who plays and until what age. These are the issues I expect my government to be discussing. These are the issues on which I expect my educated and informed government to make headway.

Please don’t harken back to the good ole days before computers and iPhones. That argument is not fitting. Many children were active in the ‘good ole’ days because they were helping out on farms or in household labour. In short, many were contributing to the household income. This again points to parents needing more support and compassion, rather than a government telling them that you just need to take your children to a park.

Going to a park is sound advice. It is a small step for many who feel that many things are, otherwise, out of their reach or grasp. It might be a small start. But, unless our government begins to create affordable childcare (where children are being active), invests in schools so teachers can more readily incorporate physically-active curricula, and empathizes with busy, underpaid parents, your words are going to fall quicker than the mercury in a Canadian winter on tired ears.

The reason I chose Jan Steen’s c.1665 painting, So the Old Sing, So Twitter the Young, to illustrate this post is to counter the idea that many parents and families are living in an opulent age of technology comparable to the wealth of the Dutch in the seventeenth century. The ones who live those opulent lifestyles are very few, and if children are addicted to their screens trying to emulate these peoples…it has less to do with their parents trying to force them away from those screens but more to do with the fact that, even to children, wealth is enviable. Want. “I want that.” Most consumable things are marketed to children because they “want.” Parents are inundated with marketing campaigns targeted at their children. Bright lights, flashing colours, bold pinks and blues—gendering children’s wants and desires.

So…maybe, government, make things a little easier for parents. Rethink your ideas on affordable childcare and your monolithic class-sizes. That, I think, will have the longest-lasting effect on how active children—to their greatness or their detriment.