I’ve always had complicated thoughts about Hamlet. If not complex thoughts, then lingering thoughts. The kind of moments that keep you up at night as you try to think through Hamlet’s soliloquies. The kind of thoughts that force you to hold back a sob, as you reach into the night to grasp the words of the bard, nay to clutch, scratch, and pry those words into or out of your mind or soul–body or being. (Please note that this post will discuss suicide in the context of Hamlet. Please do not read if you may find this triggering)

Hamlet is regarded as the play of the non-acting hero. The hero who does not want to act. And, for the longest time, I think that I was meant to view this as something that takes away from Hamlet’s character. Perhaps, at the time, if was meant to detract. However, I’m not entirely sure that’s the case. Why else would Shakespeare spend such woefully beautiful phrases to decry Hamlet as that dullard who will not restore the chain of being and rid Denmark of a fratricidal king.

Hamlet’s genius remains its ability to delve into the mind of the shattered remnants of the crime scene of life. The exhaustion, the self-doubt, the self-hatred, the confusion, and the deep contemplative anxiety that may or may not be your experience or narrative. In Act I, Scene ii, Hamlet explains the chaos and wretchedness of life. He does not want to kill himself, I think, because he desires that he could just disappear or melt away. That his flesh would thaw and resolve into a dew. It is noteworthy that Hamlet focuses on the flesh, body, and corpus in this moment. In this soliloquy, Hamlet focuses on the flesh–that it is sullied or an ‘unweeded garden / That grows to seed Things rank and gross in / nature.’ Indeed, there is a very physical and real-life, as opposed to abstract, example of Hamlet’s wretchedness. He then moves on to discuss God’s rules that prohibit suicide. Keep this thought in your minds, and I will return to this point momentarily.

As Hamlet discusses his want for death in physical terms that implicate the body, nature, and the corruption of both, he also goes on to discuss his mother’s relationship with her brother-in-law (the one who killed the king to usurp his place). Her husband, the king, dies; she does not know that Claudius has killed him. Within a month, she has wed Claudius. Hamlet’s condemnation of his mother is a very physical condemnation–she was weak in the flesh, as women are wont to be. Hamlet says, ‘Frailty, they name is woman!…/She married. O most wicked speed, to post/With such dexterity to incestuous sheets!’ Lust and incest, the crimes of his Queen and mother, reflect the spoilt edenic purity in which Hamlet wallows. Indeed, let us also remember Hamlet’s invocation to God and his prohibition of sins. As we, and Hamlet will learn, forthwith, Claudius has willfully murdered his brother to gain the crown. If God must prohibit suicide, surely he must also prohibit fratricide, located in the First Testament example of Cain and Abel. From the fall from the garden of Eden, Gertrude must also live in the chaos of Cain and Abel, and the wilful self-destruction of her son.

Indeed, Hamlet’s most famous speech, with the lines ‘To be or not to be’ moves out of the realm of the physical and into metaphysical question of death, consciousness, and the afterlife. These famous words are quickly followed by ‘Whether ’tis Nobler in the mind to suffer’. The mind is our medium of expression here; Hamlet’s self-exploration is of the mind in opposition to the fleshly, worldly sins of the flesh. To emphasize this shift, Shakespeare penned, ‘No more; and by a sleep, to say we end / The Heart-ache, and the thousand Natural shocks / That flesh is heir to?…’ Flesh is heir, or secondary, to mental anguish experienced by man. To die, to wish for eternal sleep, Hamlet is saying, is not a question of the flesh but one of the mind.

Indeed, that is not quite so simple as it seems. Hamlet continues, ‘to die, to sleep, / To sleep, perchance to Dream; aye, there’s the rub,/ For in that sleep of death, what dreams may come, / When we have shuffled off this mortal coil.’ As Hamlet talks himself through what death might be or not be, he notes that death is not the easy solution it pretends to be. Just as in life, in death, one cannot control what will happen. For instance, Hamlet’s father does not float into heaven–he must suffer his mortal sins in purgatory before he is accepted into the Kingdom of God. Indeed, what of hell, too? The mis-Fortune of the life lived is also the mis-Fortune–‘The Slings and Arrows of outrageous Fortune’–of the afterlife. Indeed,  Hamlet works this out, he realizes that just as the physical metaphor of a sullied garden offers him no solution, neither does his metaphysical exploration of death. It is not an answer with a simple solution. His inaction is a paradox that is, perhaps, as we shall see in my next post, solved by Ophelia.

Quite extraordinarily, Hamlet finishes by saying, ‘Soft you now, / The fair Ophelia? Nymph, in thy Orisons / Be all my sins remembered.’ This is quite telling because, *spoiler*, Ophelia dies by her own hand as she falls from a tree into the water below. And, this very messy physical act undoes Hamlet’s honeyed words ‘Nymph, in they Orisons.’ Ophelia’s tragic death is seen as her losing her mind as result of the way Hamlet treats her. She is often written off as this tragic damsel, who can’t quite handle Hamlet’s rejection. I think this is wrong. Ophelia is the physical manifestation of the chaos in Denmark. Hamlet teeters between action and in-action; Claudius has upset the great chain of being; and Gertrude is complicit by so quickly bedding Claudius. But, very arguably, Ophelia is not that simple.

Soft you now, dear readers. I will continue this post this week with Ophelia at nor without her orisons!

Heaps of Love,
WordPlay Xx
Connect with me elsewhere

Please consider donating to my Patreon page for $1/month. Support from you guys helps to make these posts more regular.  Posts like these will always be accessible. Xx

Of course, Sebastian responds with this hilarious line:

(II.i.221) Shakespeare
(also, if my line counting is a little off, my copy of the text is slightly whimsical when it comes to numbering–apologies)

I’ll just be over here, giggling.
Updates to come: (with more laughing)

“The wills above be done, but I would fain die a dry death.” —Gonzalo in The Tempest (I.i.67) by William Shakespeare

Real-life application of the Shakespearean experience.

I was reading the introductory notes for the play and, immediately, I am throwing shade on a dubious English teacher I had. He told us Shakespeare’s son was called Amleth, ‘Hamlet with the h at the end’, he told us, ‘almost like omelette’, we chattered. Not even close! His son’s name was Hamnet. I am not impressed.

Now, back to what legit scholars have learnt. Based on clever contextual sleuthing, scholars worked out the years of Hamlet based upon the ‘vogue for children-acting troupes.’ Next, they worked out the placement of the rest of the plays. I’ll list them here in a creative infographic:

A timeline of Shakespeare’s plays with historical context. // Made for you by me ❤

I spent quite a while searching for historical context of the approximate dates of the production of Shakespeare’s plays. I hope it’s obvious that 1603 marks the reign James I of England and VI of Scotland and the death of Elizabeth I. I recall studying Shakespeare in school and only getting brief ideas of context. My first year at uni did a rather terrible job at contextualizing Shakespeare’s present. Today, I started looking up different events around the dates and I was super intrigued. Tea was not a thing until almost the end of Shakespeare’s plays! Shakespeare’s time was rampant with european explorers of the east and west. But I wanted to make sure that I did put in some non-western historical events because history and our conception of the world should not be akin to an English rose sprouting from ye olde Englande. Rather, we should recall that the world existed and moved outside of this historical ego. I didn’t want my conception of Shakespeare’s time of production as solipsistic. This project isn’t *just* about reading Shakespeare. It’s about pushing the ways I see language and the way I see history and artistic production. It’s about not holding onto preconceptions of Shakespeare.

Rather irreligiously, I am beginning at the approximate end. I am beginning with The Tempest. It was the first in my collection, and I am not sure how I’ll progress from there. Very soon I’ll have to have a better idea of the next Shakespeare I’ll read, but for the next little while, I am going to enjoy where I’ve begun. I can read with tea.

Shakespeare I have already read & seen:
The Taming of the Shrew
Macbeth (one of my favourites)
Othello (in secondary school, we rewrote this play with Othello’s secret samosa recipe instead of Desdemona’s handkerchief–we were hilarious)
Hamlet
Twelfth Night

Shakespeare I’ve seen:
Merry Wives of Windsor
A Midsummer Night’s Dream
The Merchant of Venice (one of my favourites)
Much Ado About Nothing

Thank you for all of your suggestions on where to begin my journey. It was helpful! 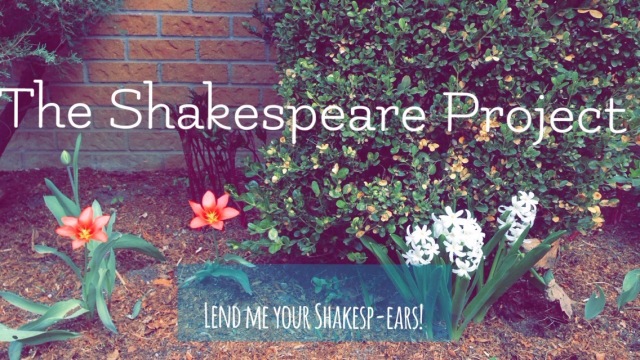 I decided that I need to get back into Shakespeare. I feel like my soul breathes when Shakespeare in my life. I am going to attempt reading at least one Shakespeare play a month. I will share my thoughts, experiences and struggles throughout this project.

Does anyone have any suggestions as to where I should begin? I have read a few, but it has been some time. Let me know in the comments what you think! Thank you for your help! May a worthy feast bless your midsummer’s daydreams.